It’s happening, whether we accept it or not. Human activities are warming the planet at an unprecedented rate. We are also dismantling the world’s rainforests and filling our beautiful rivers, lakes and oceans with plastics and chemicals. Major corporations are mainly at fault, but the decisions we make from home can take a huge toll on the environment.

So if we can’t find the time or energy to protest in the streets alongside Greta Thunberg, here’s what we can do from the comfort of our own homes:

Considering the fact that China is no longer accepting  recyclable trash from the US and other countries,  much of what we think we’re recycling is ending up in landfills and in the oceans. That’s why it’s important to reuse instead of recycle. Avoiding plastics altogether is also a step in the right direction.

Take the average plastic toothbrush, for example. It can take hundreds of years to breakdown. Since they linger for so long, enormous amounts of toothbrushes have been found in the world’s oceans, and in the stomachs of birds and whales.

Meanwhile, bamboo toothbrushes are growing in popularity. It only takes a few months for them to break down, significantly lowering their chances of being swallowed by an animal. They’re not oil based, as are plastic toothbrushes, meaning no oil was extracted to produce them, another advantage.

Get your bamboo toothbrush by clicking on the image:

Plastic bags are an even bigger problem than toothbrushes. They have a direct effect on seals, turtles, whales and seabirds, among so many other life forms. These animals often mistake them for food and choke on them, or they are simply caught in the abundance of plastic bags floating around the ocean.

At the current rate plastic is expected surpass the amount of fish in the sea by 2050.

Let’s not let that happen.

The most eco-friendly way to get your reusable, non-plastic bag is by purchasing one from your local supermarket. But you can also order several by clicking on the image below.

Carbon emissions are the main element trapping solar radiation in the atmosphere, heating the planet. Energy from burning fossil fuels to light our homes is a huge contributor.

Fortunately, solar energy is becoming more abundant and more affordable. Depending on what part of the world you live in, your local government may offer tax incentives for homeowners who use solar energy. In the United States there’s the solar Investment Tax Credit (ITC), supporting solar energy growth since 2006. It offers a 30% tax credit for homes and commercial properties that use solar energy. Even without it, solar energy  significantly reduces our energy bills, saving us money while saving the planet.

You can always start small with a solar phone charger, like the one here.

Or take a look at these outdoor solar lamps by clicking on the image below. 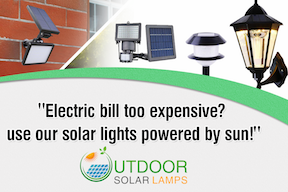 Quite possibly more effective than all of the above mentioned, numerous studies show the best thing we can do for the environment, as individuals, is adopt a plant-based diet.

Why?  For one, there are currently over 7.5 billion people on the planet. Meanwhile, each year there are approximately 70 billion land animals that have been bred into existence by human beings, destined to be killed for human consumption. These animals require lots of land for food, the reason livestock systems occupy up to 45% of the Earth’s ice-free land.

All that land needed to make food for cows, chickens, and pigs means lots of forests have to be chopped down or burned, releasing enormous amounts of C02 into the atmosphere. In fact, animal agriculture is the leading cause of Amazon rainforest destruction.

It also contributes approximately 18% of all global greenhouse gas emissions, which are warming the planet at an unprecedented rate. This is more than the entire global transportation system.

So there you have it, the best ways we can help the planet from our favorite place, home.

If you like what you just read please subscribe (the option pops up) and if you’d like to support our cause to make the world a better place, feel free to make a contribution  and Become a Patron!